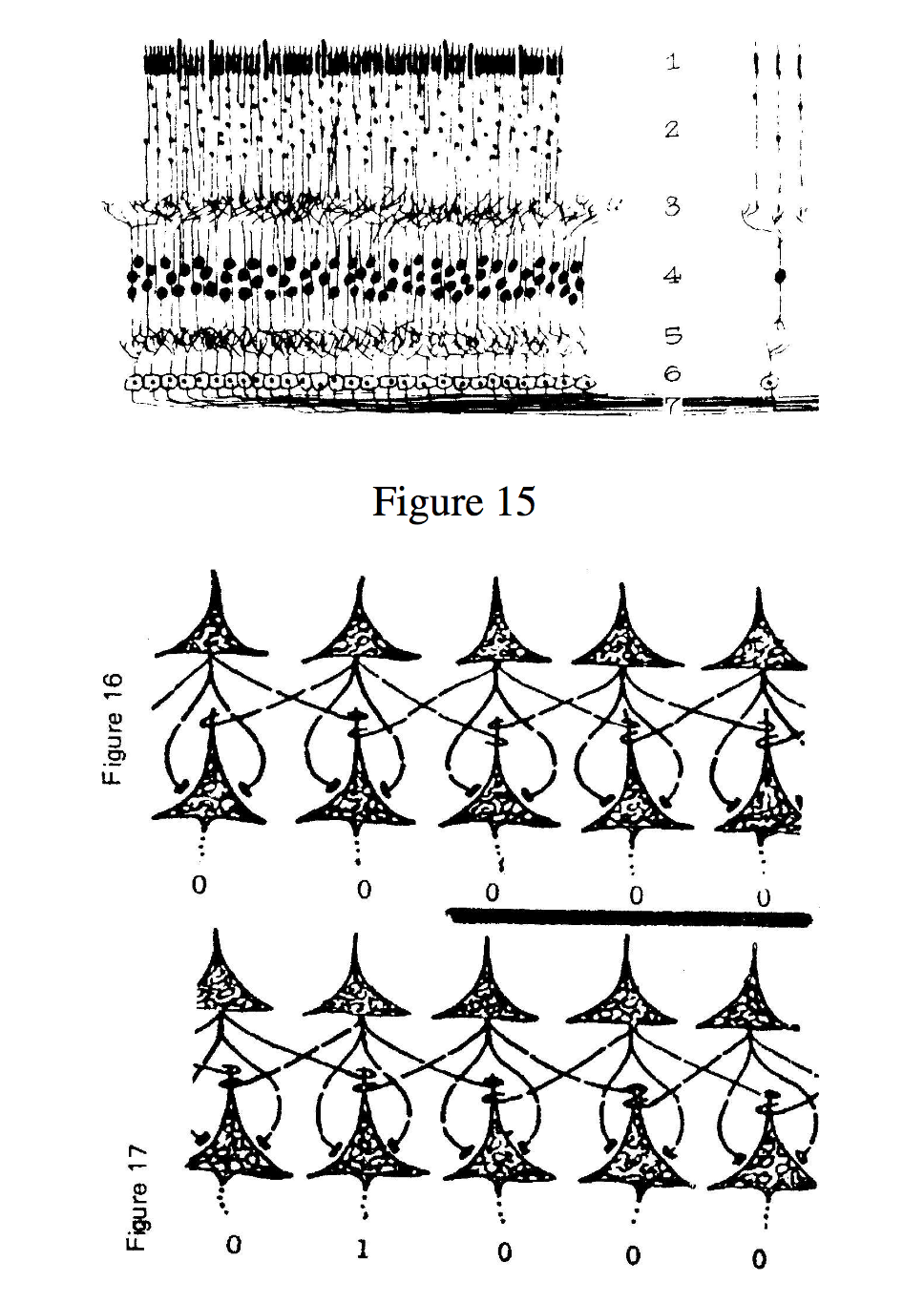 Neural Computation in the Retina of Vertibrates

A description of neural computation by Von Foerster

VII.Computation. The retina of vertebrates with its associated nervous tissue is a typical case of neural computation. Fig.15 is a schematic representation of a mammalian retina and its post-retinal network. The layer labeled #1 represents the array of rods and cones, and layer #2 the bodies and nuclei of these cells. Layer #3 identifies the general region where the axons of the receptors synapse with the dendritic ramifications of the bipolar cells (#4) which, in turn, synapse in layer #5 with the dendrites of the ganglion cells (#6) whose activity is transmitted to deeper regions of the brain via their axons which are bundled together to form the optic nerve (#7). Computation takes place within the two layers labeled #3 and #5, that is, where the synapses are located.

Form computation: take the two-layered periodic network of Fig.16, the upper layer representing receptor cells sensitive to, say, ‘light’. Each of these receptors is connected to three neurons in the lower (computing) layer, with two excitatory synapses on the neuron directly below (symbolized by buttons attached to the body), and with one inhibitory synapse (symbolized by a loop around the tip) attached to each of the two neurons, one to the left and one to the right. It is clear that the computing layer will not respond to uniform light projected on the receptive layer, for the two excitatory stimulions a computer neuron will be exactly compensated by the inhibitory signals coming from the two lateral receptors.This zero-response will prevail under strongest and weakest stimulation as well as to slow or rapid changes of the illumination. The legitimate question may now arise. Why this complex apparatus that doesn’t do a thing? Consider now Fig.17 in which an obstruction is placed in the light path illuminating the layer of receptors. Again all neurons of the lower layer will remain silent, except the one at the edge of the obstruction, for it receives two excitatory signals from the receptor above, but only one inhibitory signal from the sensor to the left. We now understand the important function of this net, for it computes any spatial variation in the visual eld of this eye, independent of intensity of the ambient light and its temporal variations, and independent of place and extension of the obstruction.