Anatomies of Intelligence & the Concept of Aesthesis

Anatomies of Intelligence is an artistic research initiative seeking to make connections between the formats and collections of anatomical knowledge and investigations into the “anatomy” of computational learning and prediction processes, datasets and machine learning models.


{on method: an Observational Method for Empirical Technics}


Amongst our focus points are those that relate to tacit knowledge and a reliance on the senses when accumulating knowledge about bodies and body-like structures. The concept of “aesthesis” has been especially useful in shaping our work; aesthesis is a somewhat obscure term occurring in eighteenth-century European medical and philosophical dictionaries describing “the faculty or power of sensation” in scientific practice. It was a crucial aspect of early-Enlightenment-era anatomy, botany and other efforts to know and classify the natural world.

Our concept of aesthesis shapes a methodology for this project that looks at the “sensory power” displayed by machine learning algorithms, their representations and sets of training data. Our aim is to engage with different modes of performativity by which these aesthetics emerge, experimenting with different orientations for observation and knowing, and creating a specific vocabulary for our methods based in an anatomical arrangement of parts and systems.

Until this point we have opted for the live algorithm setting as a way to bring out an embodied presence for existing with and within the other bodies of data science. Dissective, preparatory and demonstrative gestures lie at the center of our approach. And by developing our own demonstration tools and data sets, our process-based methodology brings to surface the artisanal human acts of craft and gesture inherent to such processes. 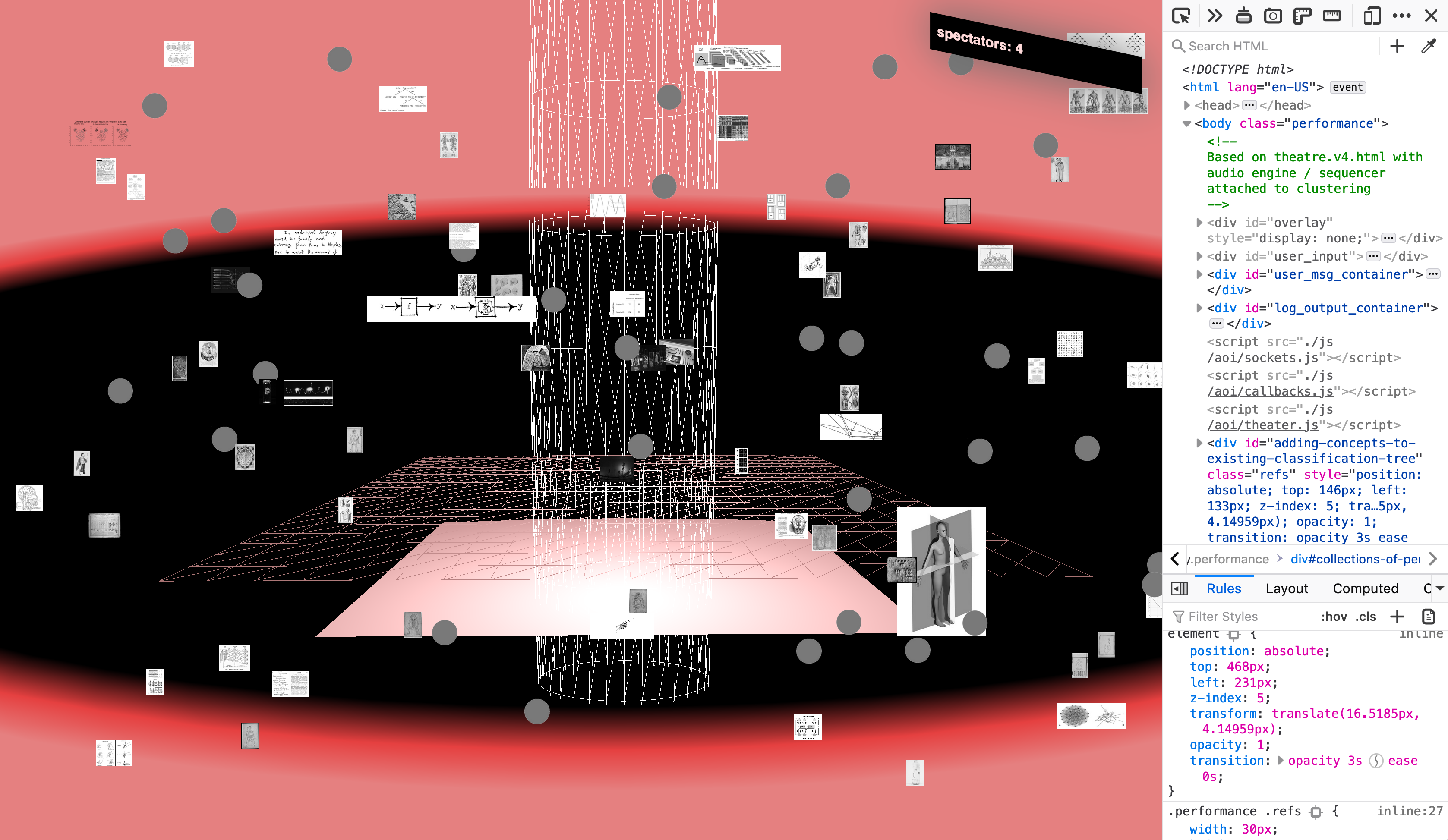 {the catalogue: gestures of Collection and Preparation}

We began the project by building an online repository which gathers terminologies and techniques for a critical examination of the “anatomy” of learning and prediction processes, data corpora and models of machine learning algorithms. This catalog is a living research document into the history and present of anatomical science, as well as “anatomies” of artificial intelligence algorithms and data stewardship practices.

The catalogue is also itself a reflection on the process by which collections of anatomical specimens were constructed in the formative decades of European/Western anatomical science. By collecting our research exemplars as a demonstrable archive, we attempt to explore the process of preparation and collection that reifies a collection of information into a body of knowledge, a collection that can be consumed and an ontology created.

Find here for a growing glossary of terminologies in this project.

The catalogue itself has a built-in javascript API and a machine learning function which can be ‘activated’ by writing code on the web console. The functional commands of the script utilizes terminologies from the anatomical theater which guides us through the process of clustering the different catalog entries.

{the theatre: Staging Bodies of AI as Spectacle}

The catalogue interface is also our platform to explore, through performance, how such a collection and an artisanal algorithmic toolkit can confront the idealized bodies of artificial intelligence — its fixed representational structures and opaque learning processes.

Inspired by the layout of the 18th century anatomical theatre, the performance is divided into various interfaces:

{1} the catalogue entries where the objects and procedures can be visualised, projected on to a large table;
{2} the web console from the catalogue where the script runs;
{3} interfaces displaying code used to sonify and visualize the processes of analysis. 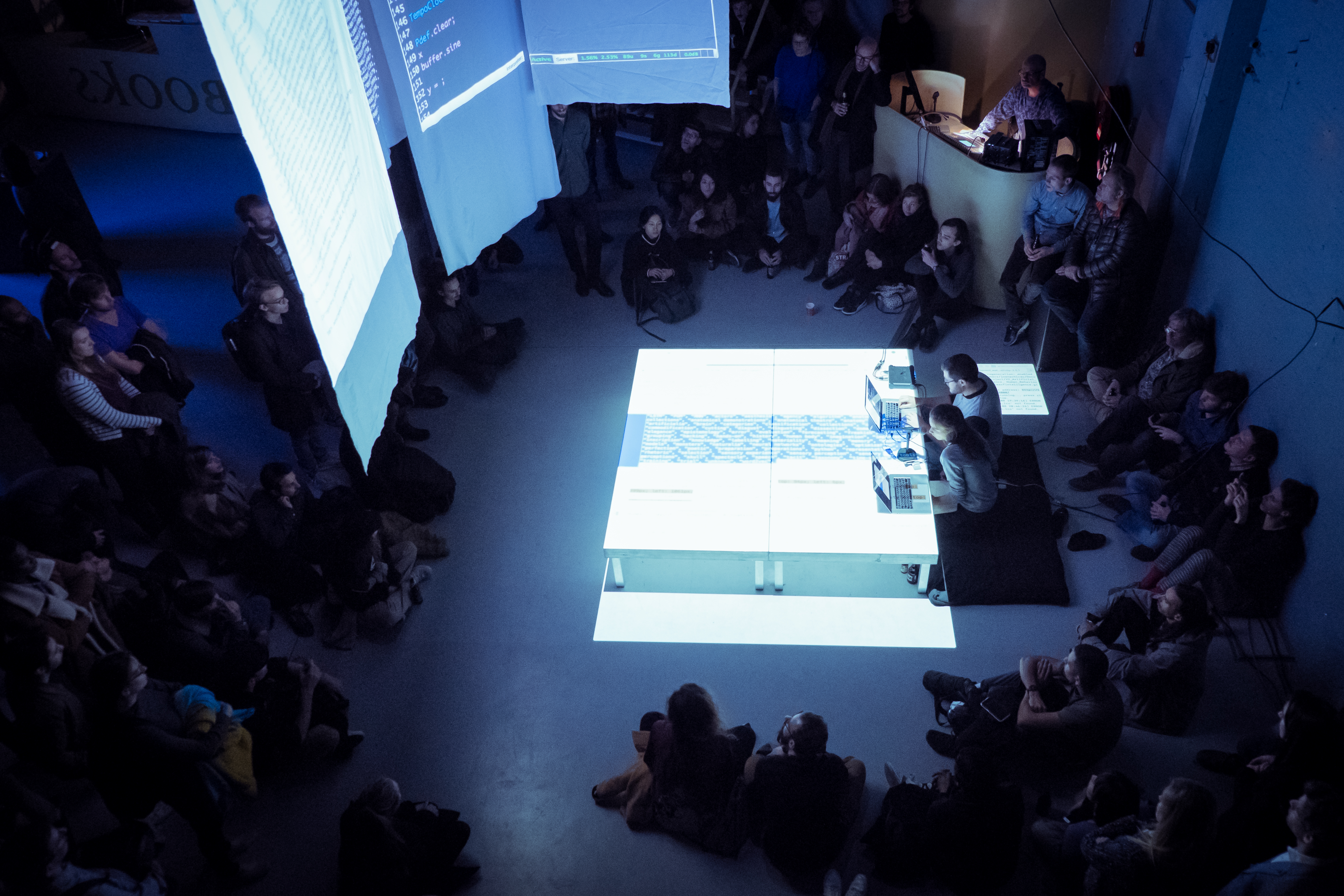 During performances, sound is used to accompany the visual representation of the catalog while the data analysis and other meaning-making algorithmic processes are carried out. Unique elements of sound directly reflect each specific step of the algorithms being used, which are slowed to human-perceptible scales so that their aesthetic features of form and temporality can be perceived by the audience.

Joana Chicau [PT/NL] is a graphic designer, coder, researcher — with a background in dance. Her trans-disciplinary project interweaves web programming languages and environments with choreographic practices. In her practice she researches theintersection of the body with the constructed, designed, programmed environment, aiming at in widening the ways in which digital sciences is presented and made accessible to the public. She has been actively participating and organizing events with performances involving multi-location collaborative coding, algorithmic improvisation, open discussions on gender equality and activism.

Jonathan Reus [US/NL] is a composer, researcher and transdisciplinary artist. Fundamentally interdisciplinary in approach, Reus’ performance and artistic works are characterized by hands-on experimentation, hybrid-thinking, and consideration for the material conditions and embodied relationships in which culture, technologies, and knowledge are created. In this spirit, Reus’ music and performance draw equally from vernacular folk music traditions as from live-coding, data feminism and neuroscience. He uses recombination, intervention, and modification of technological media to uncover new narratives and imagine musical futures.

Anatomies of Intelligence is a project by Joana Chicau and Jonathan Reus, co-produced with the generous support of V2 Lab for the Unstable Media (2018)
Photographs by Lavinia Xausa.